Coping mechanisms when longing for Paris

It has been seven months since I returned from Paris and through that time I've been incredibly fortunate to remain so inspired from the French cultural transfusion.  I have started nearly 50 paintings in this past calendar year and remain at a creative level I've never experienced before.  Despite my drunken swooning from the experience I am longing to get back. So I thought I'd resurrect my posts leading up to next May and share some of my coping mechanisms.

Last spring I was open to almost any type of art and how I might assimilate other art forms into my work.  I love going to the museum and finding art objects from antiquity that I can place in my work. At the time a major influence was developing in my subject matter: the inclusion of Greek red and black-figured vessels. I enjoyed the narrativity as well as the formal simplicity of the pieces and started off by posing my models in ways that reiterated these art objects (or responded contrastingly to these images).  I'll post some examples in another post, but wanted to share some really wonderful books I've read that went along with those ideas.

I remember purchasing a used book in undergrad, The Cambridge Introduction to Art: The Art of Greece and Rome by Susan Woodford.  There was this simple description of the bronze "Dancing Faun" that I enjoyed reading (see top image below).  Years later on my own trip to Pompeii (circa 1998) I remember seeing a copy of the piece on location (bottom). Its my understanding the original that was found in the late 19th century excavation is in the Museo Nazionale in Naples. The recollection of my travels to Pompeii and the inspiration that has emerged, has happened in ways (and intensity) I never would've thought possible.  That too, will be another post. 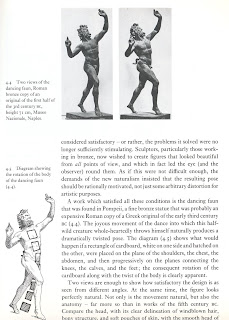 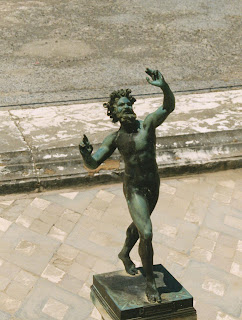 This summer when I was going overboard ordering used books on line I found another book by her called, Images of Myth in Classical Antiquity along with H. A. Shaprio's Myth into Art: Poet and Painter in Classical Greece.  Both were of great inspiration and clarity in explaining the narratives and how they evolved. Other books that fall into this category or are simply books I found interesting on Pompeii/ Myth are: Diana at her Bath: The Women of Rome by Pierre Klossowski, The Great Mysteries of Archeology: Pompeii by Tatiana Pedrazzi, Gods and Heroes in Pompeii by Ernesto De Carolis, Women and Beauty in Pompeii by Antonio d'Ambrosio, Eroticism in Pompeii by Antonio Varone and Eros in Pompeii: The Secret Rooms of the National Museum of Naples by Michael Grant.

Several other books which I've enjoyed (and to keep from being depressed by not being in Paris) are David McCullough's recent work, The Greater Journey: Americans in Paris, A Key to Louvre: Memoirs of a Curator by Michael Laclotte, Eiffel's Tower by Jill Jonnes and finally, one of my favs this past summer: Antoine's Alphabet: Watteau and His World by Jed Perl. I reread Walter Pach's bio on Ingres, which is titled after the artist. Also love Kenneth Clark's two chapters on Ingres in his book, The Romantic Rebellion: Romantic versus Classical Art. I also scored a wonderful book that I can't read because its all in french called, Ingres and the Antique. Its a wonderful collection of Ingres' studies from Greek art.

One exhibition I'm really looking forward to seeing is the Degas and the Nude show.  It's only visiting two venues: the MFA in Boston through Feb. and Musee d'Orsay afterward. Luckily, I get to see both shows and am so excited.  This will be yet two separate posts, one for each show.  There have been a number of great online reviews and a nice podcast on NPR.  They can all be found here:

Degas and the Nude - Boston's MFA

Degas and the Nude- Musee d'Orsay

Degas and the Nude on NPR's Podcast

Degas and the Nude on Christian Science monitor

Degas and the Nude on Boston.com

The exhibition catalog is decent as well.  I really enjoyed the interview with Lucian Freud regarding some of Degas' work, imagery and approach. The last major Degas exhibit I saw was the Degas: Beyond Impressionism show at the Art Institute in Chicago in 1997.  Killer.

In an effort to sustain myself until I fly to Boston, I've chose to try several French-themed recipes to satiate my growing need to be back in Paris.  There are a number of books I have on French cooking, which I love as I try to learn to make some of these dishes. I read Kate Whiteman's The Food Lover's Guide to the Gourmet Secrets of Paris. Its a nice collection of both staple recipes and descriptions (and locations) of markets by arrondissements.  I just found Barefoot Contessa's Barefoot in Paris and had already tried a recipe from it (Lentil Sausage Soup) that a close friend of mine shared with me.  I am reading The Paris Cookbook by Patricia Wells, which I scored at Half Priced Books.

There are some other cookbooks that appear to be quite popular now as well.  Picasso: Bon Vivant by Ermine Herscher, Monet's Table: The Cooking Journals of Claude Monet written by his grandaughter, Claire Joyes, Renoir's Table and Cezanne and the Provencal Table both by by Jean Bernard Naudin, and finally, the one I was looking at this morning, Celebrating the Impressionist Table by Pamela Todd.  After walking the dog, I decided it might be a good way to tailgate for the Degas Exhibits. I love football as much as art and figured they should both receive equal consideration. :)  And so, perusing through Todd's book I found this pic and realized what I was making: Soupe a l'Oignon au Gratine . 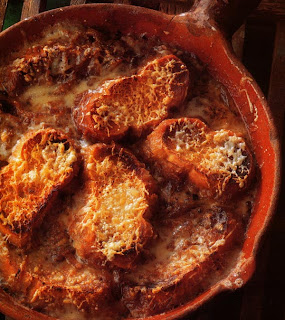 I began by shopping and getting some ingredients I did not have such as gruyere cheese.  I was reading the label of the cheese and it nearly brought tears to my eyes, like the Degas plates. It reads:


"This is the difference cave-aging makes.  Raw, whole cow's milk,  aged for 12-14 months produces an enormous 80lb wheel that is dense, creamy and immense in flavor. Saline, beefy, and fruity sharpness pervades the firm paste of this Swiss gem; small crunchy bits serve as evidence of careful patient aging.  They are the beginnings of amino acid clusters, and offer an unexpected respite from mouthfuls of smooth, savory cow's milk."
As I started slicing the vidalia onions I purchased and put on a mix cd of French music, mostly from the turn off the century, and mostly from a cd I purchased from the Art Institute of Chicago called Music, Paris and Degas. I started off with Django to get me hopping since I am not overly excited with veggie prep. Not exactly what I was listening to, but close:
A Django sampler
The onions hit the skillet with garlic, thyme, sizzling butter (gasp!)..... 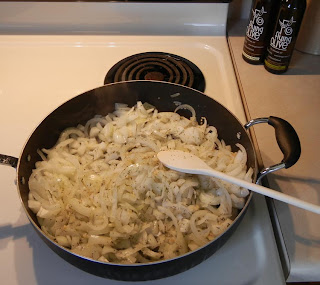 and then covered and turned them down low to simmer for 30 minutes. 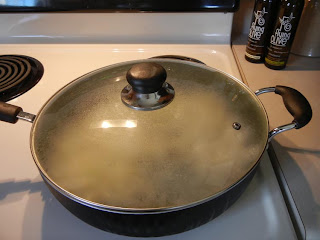 I put on Yvette Guilbert's Le Fiacre and then Paulette Darty's Amoureuse:
Yvette Guilbert on youtube
I  took the wrapping off of the gruyere cheese and it smelled heavenly- like a $15 chunk of cheese is supposed to. 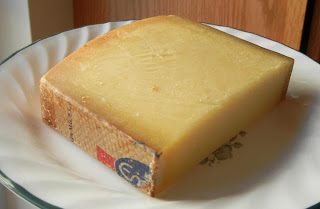 I grated some of the cheese, and sprinkled it on two baguettes I purchased at Panera, and threw it under the broiler until it melted and turned golden. 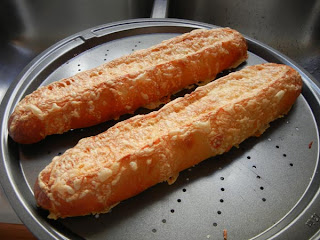 I must say that I started sneaking chunks of the gruyere and it was absolutely stunning.  I then drank about half a bottle of cabernet that I purchased for the soup during the rest of the prep. Not sure if it is an appropriate choice of wine to be paired with the cheese, but thought it would since they are both ingredients in the recipe.
At this point Erik Satie's Gymnopedies played, along with Chopin's Mazurka in C Major, and my favorite Opus 17, no. 4- all by the amazing Rafal Blechacz, Nora Shulman's Arabesque No. 1 for Flute and Harp, and Debussy's Pagodes.  Perhaps, because of the amount of wine (4 glasses...blush), it was an amazing atmosphere.  The cabernet and beef stock were both added and brought to a boil. 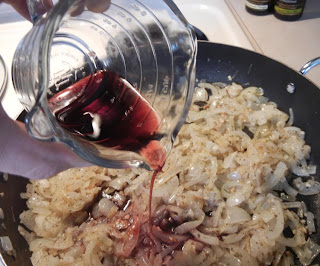 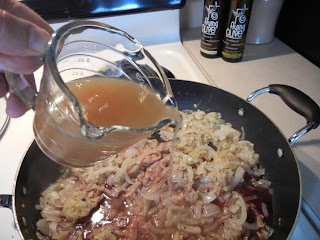 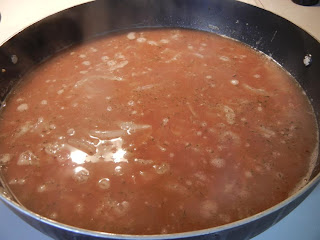 The baguettes were cut up into sections and thrown in under the broiler a second time. 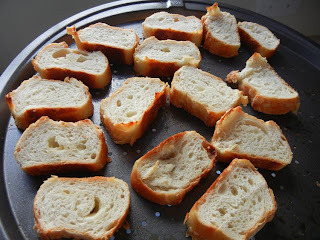 After they were lightly toasted (crunchy, but not browned) I placed them in a pan and grated more gruyere. 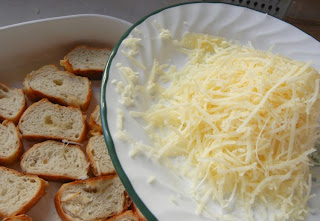 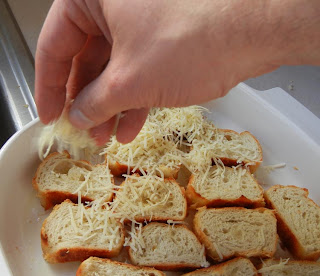 I spooned in the soup, which smelled heavenly, over top and completed two layers. 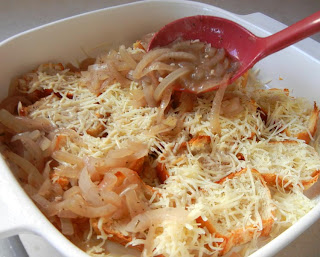 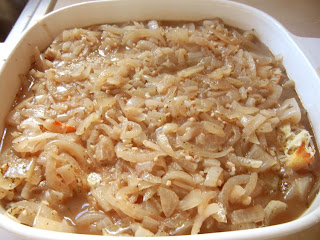 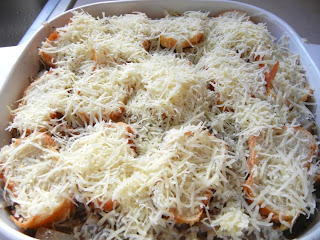 After 20 minutes, the cheese had melted and I kept it under the broiler for about another 4-5 minutes to brown it up a little more. Turned out great.... 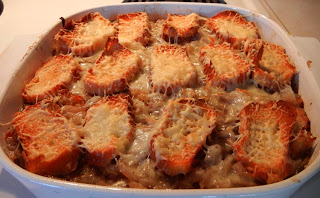 As its cooling now I'm reading excerpts from Richard Kendall's Degas by Himself, (which has great letters and journal entries by Degas) at the kitchen table while my dog is whining at the smells wafting through the house by the cooling stove.  I'm ready to devour this soup like I'm ready to devour those wonderful nudes in Boston and Paris.

Posted by bmerikson at 6:25 PM No comments:

bmerikson
I am an oil painter who teaches drawing, painting and illustration at Xavier University.